When you write a cheque and there’s not enough money in your account to cash it, your bank charges you for having Non-Sufficient Funds. One NSF cheque can easily cost you $90 in fees. and potentially set up a chain reaction that causes multiple cheques and payments to bounce, resulting in hundreds of dollars in fees. How? Keep reading...

What is the real cost of NSF fees?

Meet Dan — He’ll show you how much NSF fees suck

Dan’s* doing pretty well. He’s just paid off his student loans, he has a job, and has a pretty good handle on his budget. But on the 16th, he crashed his motorcycle and had to pay $500 in repairs. He wasn’t going to get paid until the 1st of the next month, so the accident left him $100 short for rent that was going to be due on the 31st.

Let’s say Dan didn’t realize that he was going to be short. He wrote his rent cheque like he always does, but he didn’t have enough money in his bank account. The bank charged him a $45 NSF fee** for the bounced cheque—on top of the $45 NSF fee that his landlord charged him. He just paid $90 in fees and still owes the $100 he was short! That’s insane. Not to mention that missed payments on loans and credit cards could impact your credit score, and in Dan’s case, his landlord now thinks he’s a sketchy tenant.

*All characters appearing in this work are fictitious. Any resemblance to real millennials is purely coincidental. No actual red cars were harmed in the making of this blog post.

Save yourself from NSF fees with MogoMini 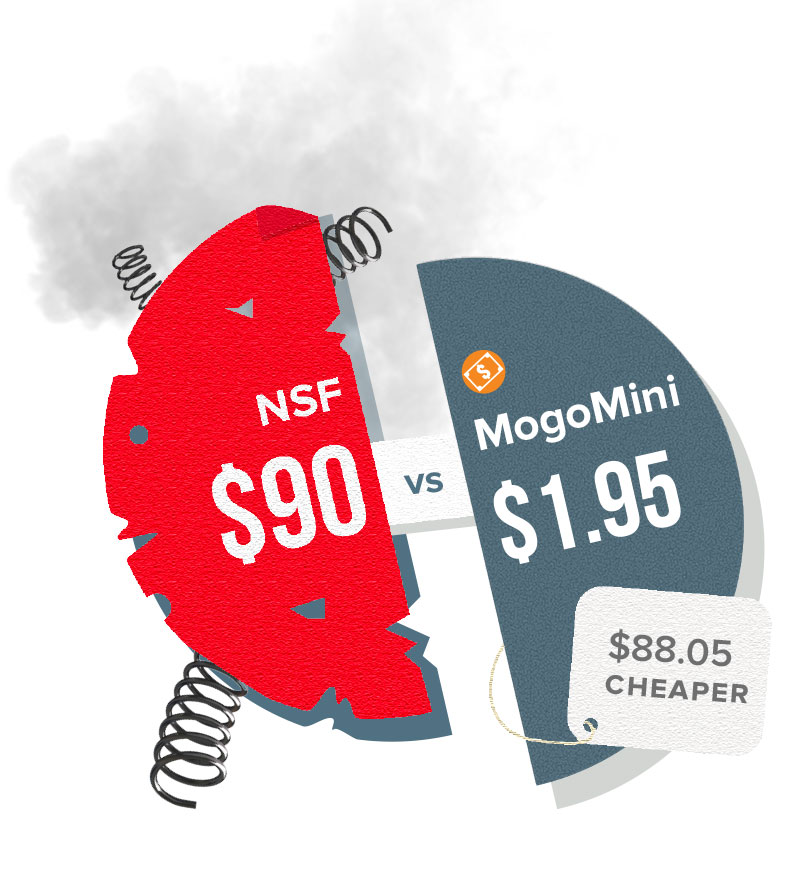 Let’s pretend that Dan signed up instead for MogoMini at 47.71% AIR (about 13 cents a day in interest per $100). His application was processed and approved instantly, and the $100 he needed was in his account the very same day. If he had gone to the bank, it could’ve taken a few days for him to get the money that he needed right away. For the amount he borrowed for those 15 days, he paid $1.95 in interest. That’s way less than what he would’ve paid in NSF fees—sure, 47.71% sounds scary, but at least we’re up front about the fees you’re paying. AND you’re actually saving a ton.

So Dan just saved himself $90 in NSF fees and the embarrassment of writing his landlord a bounced cheque. Ah, happy endings… they don’t just happen in Disney movies.

See if you can get MogoMini now—it takes just 3 minutes to get your credit decision and won’t affect your credit score!