What would you do if I handed you $130 right now? No conditions, no interest; it’s all yours. Would you pay a bill with it? Go out to dinner and celebrate? Throw it on your bed and roll around in it?

What if I told you that if you wanted that $130 dollars you had to save it instead? Arrgh, that’s not nearly as much fun, right? Everyone knows that saving anything is hard. How can you do that when you have bills to pay, groceries to buy, and expenses that pop up out of nowhere?

You’d want the money though – who wouldn’t? So, reach out and take it. It’s a fun little concept called “Pay yourself first”. You work hard every day. Wouldn’t you say that you are worth at least five dollars a check? You wouldn’t let bill collectors rob you of your last five dollars, so why do it to yourself?

If you get paid every two weeks, and you stick $5 in the bank (or an envelope) each paycheck, that’s exactly what you’ll have in a year: $130. Your $130. No one else’s. Yours to play with, reward yourself with and enjoy. Consider it the simplest form of “mad money”. Sure it’s not enough to go to Tahiti, but it is enough to take a friend out to dinner when they’ve had a bad day. It might even be enough to stay over an extra day on vacation. It’s several new books, movies, or a worst-case way to get the car towed home. It’s security – painless, and easy.

One warning though: Saving $5 a check is so easy you won’t even notice. Protecting that same five dollars when it turns into fifty is not. If you put the money in the bank, you get the benefit of a small bit of interest. Putting the money in your pickle jar doesn’t yield interest, but it might keep it around longer. Money sometimes grows a lot like mold. Shine too much light on it or analyze it too deeply and you’ll kill it. Turn the light off; leave it alone and walk away, and all of a sudden you have more than enough. You know your habits. The saving itself is painless; just keep your new fund out of sight and out of mind while it grows. 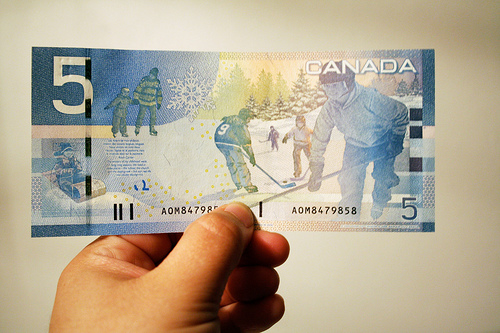