Everybody has habits, right? There are good habits, and bad habits, and everything in between. The question of the day is: How much do your habits cost you? Nah, I don’t want you to quit everything to save money – that’s not what this article is about. Instead, just ask yourself what your habits (good and bad) are and how much they run you each month.

For example: I’m a coffee fanatic. I stopped getting lattes a long time ago because I was spending over $30 a week on them, not counting gas. I didn’t want to give up the coffee though, so now I spend about $15 a week on good coffee and creamer. Total Savings: $720 a year. Wow! It adds up fast doesn’t it? In case you’re wondering about the math there:

I’ll warn you though; playing the habit game is habit forming! Once I realized how much I was saving by making small compromises (not doing without, just changing up my habits) I wanted to do it over and over. I wanted to re-evaluate my habits, and everyone else’s (this is not recommended – it can make people angry!). Still though, I wanted to pass on the secret to you, in case you wanted to try it.

Here are a few more examples of how modified habits can save you huge amounts:

Estimated savings:  $1200 a year (assuming a cost of $25 each time you eat out. If you spend more than that normally, your savings will be higher.)

Estimated Savings: $720 a year (if you are paying for a $60 combo treatment once a month).

Estimated Savings: $180 per year (based on spending $15 at the snack counter per movie).

Just remember, when you play the habit game, the goal isn’t to take things away, just to change them up and see how much you can benefit from the change. Good luck! 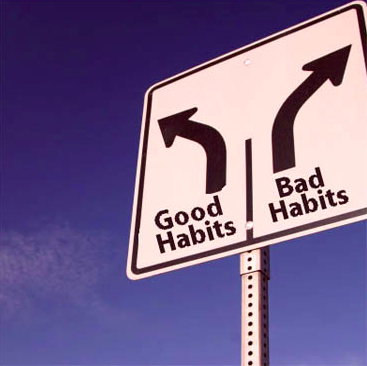