As reported by the Globe and Mail, the debt load of the average Canadian family has hit $100,000. This is a crazy statistic – as rising housing, debt and mortgage costs are pricing Canadians out of the market, and stacking debt up against them.

The majority of families with that debt load are there because of housing costs – many of which are planned; however, the number of families 3-4 months behind in mortgage payments has risen nearly 50% to 17,400 since the current recession began.

As costs of housing continue to go up, that debt-average is also going to increase. While the numbers may seem insane, it’s important to remember that, that level of debt doesn’t always mean financial ruin (some families are there, and paying that debt down with a plan).

The average Canadian family debt was $56,800 and that debt-to-income ratio was 93%. These numbers seemed extreme then, but have only grown now.

What can I do about it?

Reading this blog is a great start. Smart spending and taking time to get to know your personal finances is an important step to decrease your debt load. Taking action is extremely crucial – even small amounts that you can put away (or use to pay down your debt) can help you ten-fold down the road.

With the use of small loans and strong financial planning, being a part of the manageable debt portion of the country is within your grasp. 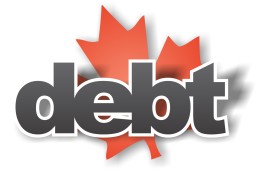